Women, down south know what a cheerful heroine Jyothika is. Still the south girls are searching for the enchanting sarees she wore on the movie Kaakka Kaakka.  She was on long career break after her marriage on 2006. On 2015, nearly a decade later, she came back to acting, with a meaning movie 36 Vayadhinile, which inspired many women to follow dreams after marriage. Jyothika was lauded for her performance. Of course, we eyed the vibrant sarees she sported on the movie. Her fashion sense has matured along with her and that’s why she is still a great inspiration in the celeb world. Her next movie ‘Magalir Mattum’ is slated to release soon this year. So we get to see her making public appearance often.

Off late, Jyothika attended couple of events, on both; she sported similar saree style which made her look way younger than she is. Being a mother of two, Jyothika knows how to dress her up without being dramatic, yet looking stylish all the way. The saree which seems to have taken a fancy over this humble heroine is the super chic dhoti drape. 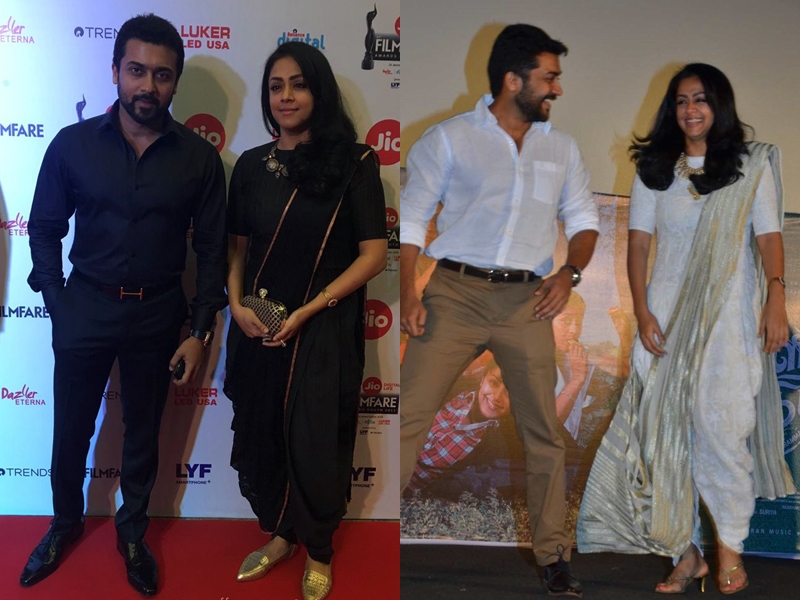 She flaunted the same style on both Maglir Mattum audio launch and the recently held Jio Film Fare awards. Both the time she accessorized this monochrome ensemble with statement necklace and golden footwear.  With subtle makeup and free hair, she made the loud statement, that even busy mom can be both modest and striking!

Shop The Silk Sarees That Matters The Most This Season